There comes a tipping point in every politician’s career when the end is nearer than the beginning. It’s when one’s career has become indelibly, irreparably, irretrievably tarnished, when a politician becomes unelectable.

For beleaguered Mayor Rahm Emanuel, the March 15 election was his tipping point. Two candidates with whom Emanuel is politically joined with at the hip, Anita Alvarez and Hillary Clinton, fared poorly, if not disastrously, in the Democratic primary.

It will be remembered that Emanuel won an unimpressive 329,701-257,101 runoff in April of 2015, after spending upwards of $25 million, and that, with the benefit of hindsight, was only because the Laquan McDonald shooting tape was not released until after the vote. Had the tape been released earlier, Emanuel would be peddling his resume.

How politically toxic has Emanuel become? Analyzing the March primary results, particularly in the Clinton-Bernie Sanders presidential contest, the state’s attorney’s race and the clerk of court contest, it’s somewhere between mammoth and monstrous. The politics of race, which have been dormant since the 1990s, has been resurrected. A black mayor of Chicago in 2019? It’s gone from implausible to likely.

The trouncing of Alvarez for renomination as state’s attorney, in which she got a paltry 169,665 votes (25.8 percent of the total) in Chicago, compared to 409,837 (62.4 percent) for Kim Foxx, coupled with Clinton’s anemic 375,055-315,953 (53.7 percent) triumph over Sanders in the presidential primary, seal Emanuel’s doom. Those results conclusively indicate the realigning or reawakening of three major Democratic party bases, blacks, white liberals and white ethnics. All of them decisively rejected, for various reasons, the politics of Emanuel/Clinton/Alvarez.

In a three-candidate contest, Foxx, who is black and very lightly credentialed and who was the hand-picked choice of emerging party boss Toni Preckwinkle, won a majority in 36 of the 50 Chicago wards, including all 19 of the black-majority wards, where she got 231,218 votes. As shown in the adjoining vote chart, even Barack Obama should take notice. When Obama faced Clinton in the 2008 Illinois presidential primary, he won the city’s predominantly black wards overwhelmingly, getting 262,941 votes. Foxx got only 31,723 fewer votes, an amazing indication of black voter unrest and rebellion. Foxx also won a majority in 11 white-majority wards and six Hispanic-majority wards. Alvarez, despite the support of such venerable powerhouses as Ed Burke, Mike Madigan, John Daley and Bill Lipinski, won a majority in six wards and a plurality in four others.

Foxx beat Alvarez 638,226-314,344, with Donna More getting 142,368 votes. In 2008 black voters erupted from their quietude to support a black candidate for president, while this year black voters again erupted to oppose the perceived "anti-black" incumbent state’s attorney, and Foxx was simply in the right place at the right time. The stigma which attached itself to Alvarez also infests Emanuel.

There are defeats, and there are repudiations. When an 8-year incumbent like Alvarez loses 2-1, it’s the latter. Emanuel is next.

In the clerk of court race, black voters vented their wrath on the Democratic Party establishment, which had dumped 16-year black incumbent Dorothy Brown. Normally, black voters vote as they are instructed by their ward and township committeemen in the primary for the slated candidates, and then vote against every Republican candidate in the general election. Emanuel triumphed in 2015 because he had (or bought?) the support of black city committeemen, and he won their wards 106,511-98,447 (with 51.9 percent of the vote). That will never happen again. Take 106,511 votes away from the mayor’s total of 329,701, and he’s down to 34 percent of the vote.

Brown, who is under federal investigation for her hiring practices, was slated, and when the committeemen got nervous that white attorney Jacob Meister might beat her in the primary, they dumped her. She was replaced by Michelle Harris, the black 8th Ward alderman and committeeman, who is an ally of Preckwinkle. Everybody thought Brown would just fade away or get indicted before March 15, but she got on the ballot, was not indicted, had negligible money, was attacked by the party establishment — and won. Black voters grasp the concept of a political lynching, and they reacted. Defying their ward and township bosses, they voted 171,785-82,793 for Brown over Harris in the black-majority wards in the city and 81,233-44,075 for Brown in the predominantly black suburbs. Even in Harris’s 8th Ward, once the domain of the John and Todd Stroger, Brown won 9,548-9,056. Brown won every black-majority ward and township by at least 2-1 over Harris. It is interesting to note that the combined Brown-Harris vote in those wards was 254,578, just 8,363 votes shy of Obama’s high-water mark in 2008. There will be a black candidate for mayor in 2019, either city Treasurer Kurt Summers or Alderman Roderick Sawyer, and the controlled vote (180,000) and the uncontrolled vote (292,000) will unite behind that black contender.

Meister was endorsed by the major media, and he got a respectable 30 to 40 percent of the vote in Chicago’s black and Hispanic wards, but only 24 percent in the suburbs. The party spent a bundle to send out four 70,000-household mailers to Democratic voters, all highlighting Brown’s legal problems, mentioning the confiscation of her cell phone by FBI agents, and stressing that Harris was the slated candidate. After her win, Brown thanked the committeemen for dumping her. Brown got a majority of the vote in 14 wards, and she got 30 to 45 percent in the rest; in only three wards did she dip under 30 percent. Harris, by comparison, won no wards, and she fell under 30 percent in 28 wards. Brown topped Harris in the suburbs 180,116-122,735. Did somebody say that being slated was valuable? Did somebody infer that committeemen can still deliver?

In the overlooked, under-reported Clinton-Sanders race, the outcome is worse than ominous for the Clinton/Emanuel combine. It will be remembered that Emanuel hooked up with the Clintons in 1991, helped engineer the 1992 presidential win, was a White House aide until 1998, made a couple million dollars as an investment banker using Clinton’s contacts, and went to Congress in 2002. In 2009 he went back to Washington as Obama’s chief of staff and re-united with Hillary Clinton. When he ran for mayor in 2011, the Clintons raised big bucks for him. Emanuel is the kind of guy who has gamed the system and gotten rich, and who cares only about himself and keeping his job — and voters now keenly understand that.

Clinton didn’t seek nor want the mayor’s endorsement in the March 15 primary. He’s the kiss of death. First, Emanuel has alienated the blacks, and second, he has no political organization. If Clinton is elected president, there won’t be any golden parachute for Emanuel to land as secretary of the Department of Health and Human Services.

As the primary results demonstrated, there also are a lot of restive and angry white voters. How do you explain why the Far Northwest Side 41st Ward, chock full of Irish-American and Italian-American cops and firefighters, and which has an alderman purported to be a Republican, votes 6,683-5,985 (51.2 percent) for Bernie Sanders, an avowed socialist? Yet the ward gave Alvarez 54.8 percent of the vote and Meister 40.8 percent. It’s a combined rejection of both the current "culture of politics," as exemplified by Clinton and Emanuel, and a rejection of the "culture of anti-police politics," as evidenced by the Foxx win. A vote for Alvarez was a vote for "law and order." Expect Donald Trump to do very well in the 41st Ward.

However, that’s no aberration. In the adjacent 45th Ward, which has a large pocket of liberals in Portage Park, Sanders got 54.8 percent of the vote, with Alvarez dropping to 42.2 percent. Sanders also got more than 50 percent of the vote in the Northwest Side white-majority 38th, 39th, 40th, 47th and 50th wards. He also won a majority in all 11 Hispanic wards, and he even carried Madigan’s 13th Ward and Daley’s 11th Ward. Sanders won a majority in 22 of the 50 wards and a plurality in two. That is dissatisfaction writ large.

The political compass, in Chicago and Cook County as well as nationally, has gone awry. There is a mood and a developing attitude that should make every incumbent and insider quake. For them, the worst is yet to come. 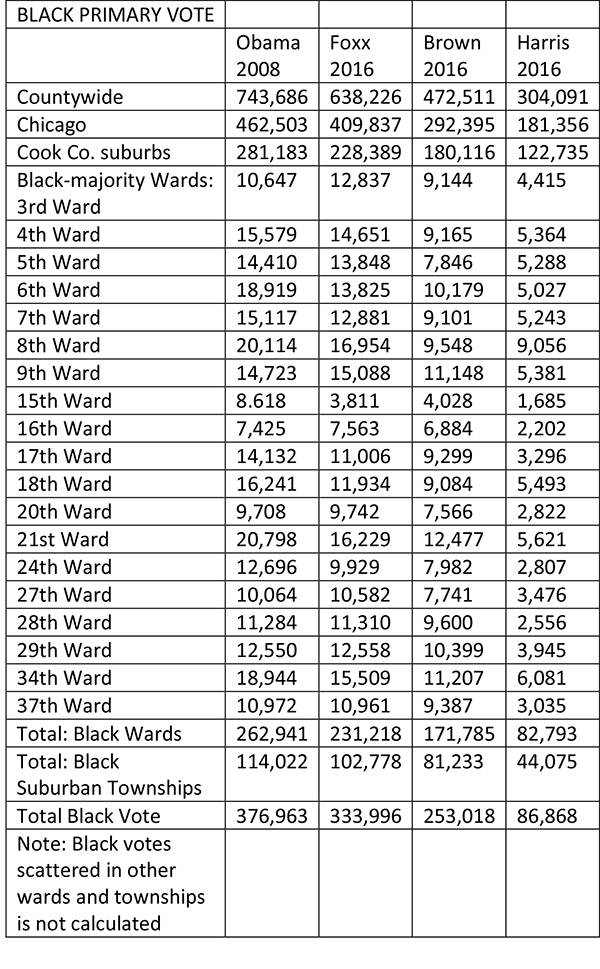