In the past, at least through the mid-1990s, judicial aspirants in Cook County lusted after some magical letters, such as HQ, Q and R. Those letters indicated qualification ratings from various bar associations, signifying highly qualified, qualified and recommended. An NR — "not recommended" — usually was the kiss of death.

Not any more. The only letters which currently matter in getting elected judge are XX, as in the female chromosome. XY, the male chromosome, is now the kiss of death. Twenty of the 29 countywide or subcircuit judges nominated in the March 15 Democratic primary, or 70 percent, are women. Of the 14 contested primaries in which a woman competed against a man, the woman won 13 of them.

The county’s judiciary is slowly becoming a no man’s land. Given current trends, by 2034 close to three-quarters of the county’s 242 elected judges will be female. It’s about 47 percent at present. As was demonstrated on March 15, Democratic slating doesn’t matter. There were 13 judges nominated countywide, and there were contested contests for nine; the slated candidate won four. Ballot position doesn’t matter, and, for men, an Irish surname no longer matters.

What does matter is gender. As can be seen in the adjoining chart, women with Irish-surnamed form an electoral colossus. They virtually can’t be defeated, even if they’re not slated. The only man who defeated a woman was appointed judge Dan Duffy, whose wife was former mayor Rich Daley’s chief of staff. He had just enough clout as the slated candidate to win 360,383-294,381 over Monica Torres-Linares. Now even Hispanic women form a colossus. In the race for the Elrod vacancy, the slated Rossana Patricia Fernandez crushed Scott Edward Lipinski 576,212-285,279, winning by 2-1 margins in the predominantly black wards and getting 63 percent of the vote in the suburbs. In the race for the Palmer vacancy, the slated Pat Heneghan had an androgynous Irish surname. Was the candidate a man or a woman? He was trounced by Susana Ortiz 412,271-316,586, even with a third female candidate pulling 136,886 votes. Ortiz topped Heneghan 3-2 in the black-majority wards and 169,673-141,019 in the suburbs.

What is happening? There seems to be some kind of cultural and racial divide, and maybe even some self-interest. Judicial candidates cannot campaign for office in the traditional sense. They cannot articulate a position on guns, abortion or drugs. They cannot promise to be "tough on crime" or "compassionate." The best they can say is they’re for "fair justice." Each slated candidate must contribute $35,000 to the Democratic Party for two countywide mailings and a sample ballot. Does anybody read that drivel?

There has long been an undercurrent among minorities, who have the most interaction with the legal system, and especially the criminal justice system. In short, minorities, especially blacks, don’t want a bunch of white guys dispensing "justice," so they tend to vote for every black or Hispanic candidate. The problem is that a Hispanic surname is recognizable, but a "black" name is less so. Hence, in a field of unknown candidates, minority voters usually opt for the female judicial candidate over the male candidate or for the Irish-surnamed candidate regardless of gender over the male ethnic candidate.

Also, in contests were no one knows anything about anybody, women vote overwhelmingly for the female name on the ballot.

The great irony is that female judges, especially in criminal and traffic court, tend to be tougher than male judges, who are more inclined to accept a plea bargain. I base this observation on 37 years as an attorney, with some criminal court experience. Female judges make an extra effort to be "tough," not "compassionate."

Another disgruntled group are black voters, who demand a "quota" on the bench. The Democrats slated four black candidates for the 13 countywide spots. The two who were unopposed won, while the two who were opposed lost. For the Karnezis vacancy, appointed black judge Devlin Schoop was slated, but Mary Kathleen McHugh, who moved into Cook County from Hinsdale, clobbered Schoop 410,904-276,351, with 157,231 votes going to an Irish man. In the black-majority wards, McHugh ran 50/50 with Schoop, and Schoop got under 35 percent of the vote in the predominantly white wards, losing the suburbs by 66,000 votes. Obviously, Schoop failed to "connect" among black voters. For the Walsh vacancy, Frederick Bates, who is black, was slated and initially had two Irish opponents, but one quit, leaving Bates to face Patrick Powers, an attorney with ties to the Republican McAuliffe/Rosemont clique on the Northwest Side.

For the Johnson vacancy, play "Taps" for poor Sean Chadhuri, the slated candidate. His problem was threefold: wrong name, wrong name, wrong name. He was appointed to the bench, but in a five-candidate race he cracked 20 percent of the vote in four wards, averaging 15 percent in the black-majority wards, and he got 15.4 percent of the vote in the suburbs. As an Indian American, he had no political base. The winner, Carolyn Gallagher, was rejected by Democratic slatemakers, but she filed any way, sensing Chadhuri to be an easy mark. Sources say that the party bosses recruited Bonnie McGrath into the race as a shill, hoping to dilute the female/Irish vote. Fat chance. Gallagher got 292,922 votes, to 124,427 for Chadhuri. The total Gallagher/McGrath vote was 441,837, while the vote for the three men in the race was 408,389. There will be no more "Chadhuris" slated.

While Hispanic voters erupted for Fernandez and Ortiz countywide, they did not turn out in the 6th Subcircuit, which contains all or parts of 13 wards radiating from Logan Square. Appointed judge Anna Loftus sought nomination in this 65 percent-plus Hispanic subcircuit, and she won with 45.4 percent of the vote, despite the truce between bosses Joe Berrios and Luis Arroyo. Both backed Carlos Claudio, who got 20,745 votes, to 25,964 for Loftus. A big Loftus vote in Proco Joe Moreno’s 1st Ward (51.3 percent), Dick Mell’s 33rd Ward (46.3) and Scott Waguespack’s 32nd Ward (55.4 percent) sealed the deal. Arroyo delivered 68.7 percent of the vote for Claudio in the 36th Ward, and Berrios delivered 55.6 percent in the 31st Ward.

In the northwest suburban 11th Subcircuit, appointed judge Marc Martin thought he got his long-delayed reward from the "Daley Clan." Martin was an attorney back in the heyday of U.S. Attorney Patrick Fitzgerald when official misconduct was an obsession and politicians were being indicted at a record pace. He shared an office with federal criminal defense lawyers Ed Genson and Terry Gillespie and did their appellate work. With the departure of Fitzgerald, political prosecutions evaporated and Martin needed a job. He was appointed a judge in 2014, as he lives in Park Ridge, just inside the boundaries of the subcircuit, which stretches south beyond Oak Park, where he was born. 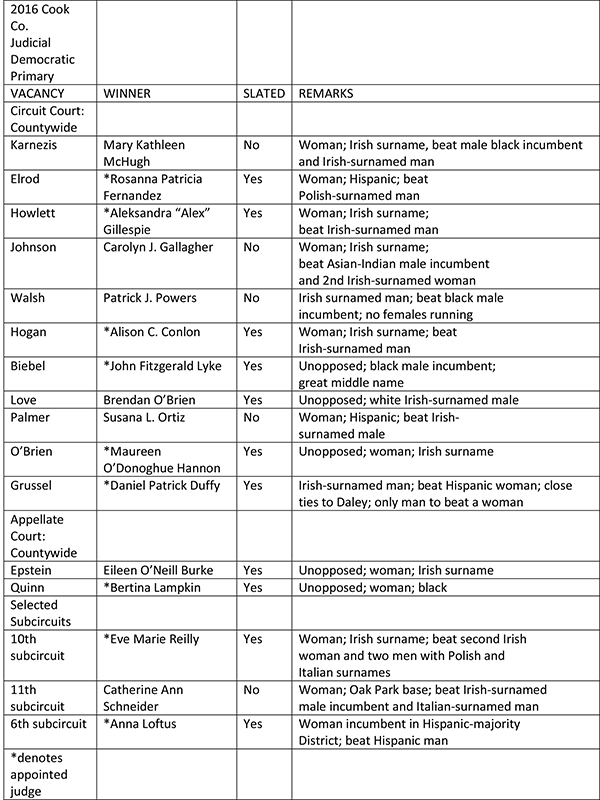