Fund-raising is measure of politicians’ ambition

A penurious politician cannot be an ambitious politician. Those lacking significant campaign cash will not be elected to office, will not advance to a higher office . . . and likely will not get re-elected to their current office.

As detailed in the adjoining chart on fund-raising, there are giants and dwarfs, and plenty in between. There are those with the Golden Touch, and those who sweat every election.

For a few prominent office holders, the amounts accumulated almost border on the obscene, and the source of those funds are the special interests which these politicians serve so assiduously. Were Bernie Sanders around, he would be foaming at the mouth about these bloated political plutocrats.

Here’s an eye opener: In the 2016 contest for the obscure post of state comptroller, occasioned by Judy Baar Topinka’s death, two obscurities are competing, appointed Republican incumbent Leslie Munger and Chicago City Clerk Susana Mendoza. It’s a proxy war between the governor and the speaker. Mendoza is Madigan’s creation, unknown Downstate and barely known in Chicago. Hispanic candidates are a hard sell Downstate. However, Mendoza she had $1,102,541 on hand, and she raised $1,054,607, including $454,900 from unions, as directed by Madigan. In fact, it was Madigan’s imprimatur that drove state senator Dan Biss out of the primary.

Munger had only $224,496 on hand, but Rauner will spend a couple million to elect her. Illinois will be awash in money for what is arguably the least important state job.

Other state, Chicago and Cook County politicians had stashes ranging from less than $500,000 down to $25,000. Money is deemed a form of self-defense: the more of it, the less likely is credible opposition to surface, although there are spectacular exceptions. Milly Santiago upset Suarez for 31st Ward alderman in 2015 despite being outspent 40-1.

Money also is a window into a politician’s future aspirations. Those with negligible fund-raising are either content and secure in their present office or are heading for the door. Mayor Rahm Emanuel had only $42,354 on hand, having raised a subpar $463,344 over a 9-month period. That’s barely $50,000 per month. During the early heyday of his first term, from 2011 to 2013, Emanuel was raising more than $2 million a year, or $175,000 a month.

Of course, the mayor raised more than $25 million in the 24 months before the April 2015 runoff, so he probably can dawdle until mid-2017, but he needs to quickly spike his fund-raising haul, to the range of $350,000 to $400,000 per quarter. The next disclosures are due in mid-July. If Emanuel’s numbers haven’t rebounded to more intimidating levels, the 2019 race will begin immediately, as he will be perceived as either crippled and unelectable or intending not to run. His already-dwindling power will evaporate, and he’ll be a mere figurehead.

In the chart, potential 2019 contenders are marked with an “(M).” There will be a diverse field, containing blacks and Hiispanics, a gay candidate, several women, an anti-Emanuel white male “progressive” bankrolled by the public sector unions, an Irish candidate backed by the South Siders, and maybe Emanuel. Many are “exploring” the race, but none, astutely, has emerged as a virulent Emanuel critic. Their presumption is that Emanuel will continue to self-destruct, so they prefer to wait.

Those “pondering” are the following, with their cash on hand in parentheses: The black candidates are Cook County Board President Toni Preckwinkle ($216,291), city Treasurer Kurt Summers ($253,808) and Aldermen Roderick Sawyer ($14,456) and David Moore ($10,773). There will be a consensus candidate. Note in the chart that Kim Foxx, Preckwinkle’s protege, raised $2.3 million to beat Anita Alvarez for state’s attorney in March, with $1,850,511 in the final 90 days. Preckwinkle ran her campaign and raised that money. In 2019, sufficient money will be there to elect a black mayor.

The possible Hispanic candidates are county Commissioner and 2015 loser Jesus Garcia ($13,618) and Alderman Proco Joe Moreno ($250,604), with Moreno expected to run against Berrios for assessor in 2018 to build up his outsider image and name identification. The women are county Commissioner Bridget Gainer ($453,888), who has ties to the 19th Ward, and Metropolitan Water Reclamation District President Mariyana Spyropoulos ($210,006), who would have money from Greek supporters. The Irish possibles are county Sheriff Tom Dart ($446,646), from the 19th Ward, and Alderman Brendan Reilly ($1,012,213), a onetime protege of Madigan who represents the Gold Coast 42nd Ward.

Chicago’s nonpartisan municipal election/runoff system ensures that anybody who gets 25 to 30 percent of the vote in a multi-candidate primary will advance to the two-candidate runoff. Nobody is too long a long shot, but there is one certainty: If Emanuel runs and gets into the runoff, he’s not going to win. Emanuel fatigue is epidemic. My prediction: Whoever raises and spends $8 million — $5 million in the municipal election and $3 million for the runoff — will be the next mayor.

Unlike major contests, where donations flow in chunks of $1,000, $5,000 and $10,000, aldermen must grub and beg for $50 and $100, usually in the form of tickets for fund-raisers, the net reduced by overhead for food and drink. An alderman’s donor base is essentially his or her ward, generating $100 to $200 a year from local businesses and up to $100 from friends, neighbors and political associates, and occasionally from a grateful constituent. “Special interests” headquartered in the Loop or suburbs are not going to donate to an alderman, who is just one of 50. Arena attempted Downtown fund-raisers for years, without success. In 2015 the SEIU’s political action committee pumped $700,000 into the 45th Ward to re-elect Arena.

Lackluster fund-raising, from $20,000 to $70,000 annually, is the norm for alderman, and not a great worry. Any challenger has to raise that much. The public sector unions spent $4 million in 2015 to elect anti-Emanuel, anti-pension reform aldermen, in order to have some leverage. With Emanuel likely gone in 2019, the union money will be spent to elect a pro-union mayor, not aldermen. 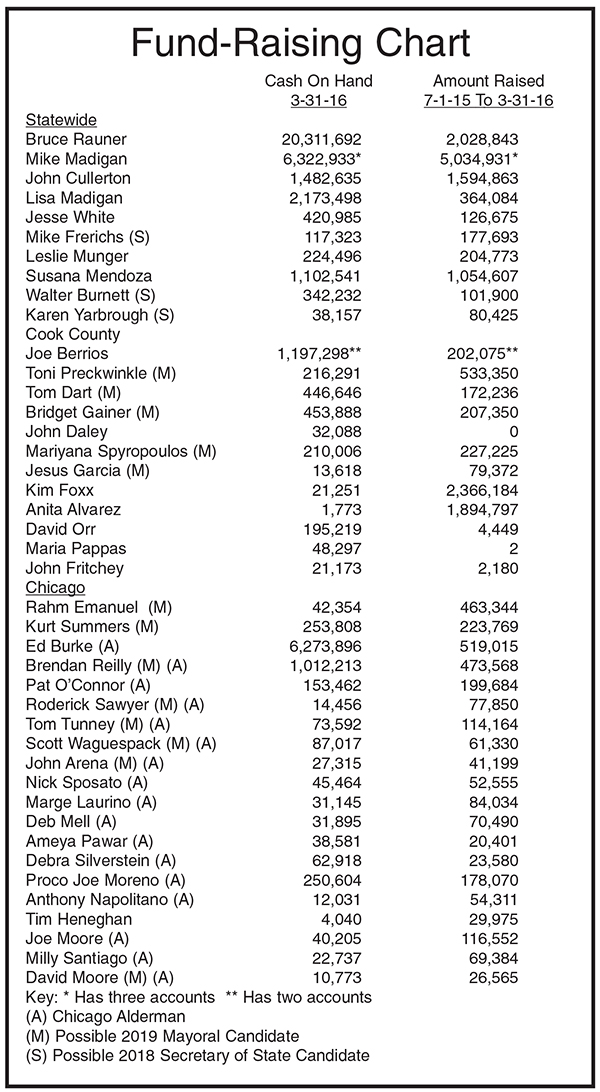