Chicago is hopeless for Republicans in future

Mark Twain popularized the saying that there are "lies, damn lies, and statistics." In Chicago, and by extrapolation Cook County and Illinois, there were truths, damn truths and stunning statistics on Nov. 8.

The most fundamental truth is that when a candidate such as Hillary Clinton wins Chicago 907,920-134,792, a margin of 773,128 votes, Illinois is gone. There is no way for a Republican to counteract that vote margin in the Collar Counties and Downstate. Clinton won the state by 859,319 votes, with Chicago supplying 90 percent of that margin.

On that trajectory, by 2028 or soon thereafter, the Republican vote may fall under 5 percent countywide and Republicans would lose their ballot line.

Clinton got 95.4 percent of the vote in Chicago’s 18 black-majority wards, 87.1 percent in the 11 Hispanic-majority wards and 84.6 percent in the seven affluent, mostly white, Lakefront wards. Chicago has become "Manhattan West," or maybe "San Francisco East," conspicuously, congenitally and compulsively liberal. As for Chicago’s black wards, they’re "Harlem West," with Trump’s 13,286 votes here only slightly exceeding his total in New York’s predominantly black neighborhood. Trump got 3 percent or less of the vote in 11 of the 18 black-majority wards. He lost the 24th Ward 15,932-245. Trump averaged 738 votes in those 18 wards. The Republicans have ceased to be a nuisance, and they now are a nonentity.

In other urbanized Great Lakes states, such as Michigan, Wisconsin and Pennsylvania, a 10 to 15 percent decline in the black vote tipped those states to Trump.

Truth number two is that, unlike the rest of the country, white male blue collar workers and those in law enforcement failed to defect to Trump in significant numbers. Only in the Far Northwest Side 41st Ward, which is chock full of cops and firefighters, did Trump even come close. The Clinton-Trump vote was 14,042-11,457, a 52.3 percent win and a margin of 2,585 votes, with Trump winning a majority in four of 47 precincts and getting 40 to 49 percent of the vote in another 28. Clinton actually did better there than Obama, who won 13,134-11,048. Clinton got 908 more votes than Obama got in 2012, while Trump, who got 42.6 percent of the vote in the ward, ran just 409 votes ahead of Romney, who got 44.9 percent. Given all the hysteria and the nasty $4 million Michael McAuliffe-Merry Marwig race for state representative, turnout in the 41st Ward increased from 24,634 in 2012 to 26,867 in this election.

The 41st Ward encompasses Edison Park, Norwood Park and Oriole Park, and it is to Chicago what Staten Island is to New York, an enclave of conservativism. McAuliffe won the ward 11,050-7,783. Debatably, the Trump vote was more of a positive than a negative for McAuliffe. McAuliffe said that he had "a lot of Trump negativity" in the Park Ridge areas of the district, but that wasn’t the case in the 41st Ward, which has 34 precincts in the district.

In fact, the Nov. 8 statistics are astounding. On the Northwest Side, except for the recalcitrant 41st Ward, the Clinton vote was 5 to 10 percent greater than the 2012 Obama vote.

45th Ward: As demonstrated in past aldermanic elections, liberals in Portage Park tend to vote more expressively and energetically than conservatives in Jefferson Park and Gladstone Park, the home of many police and firefighters and retirees. Obama won the overwhelmingly white ward 14,084-6,207 in 2012, getting 67.8 percent of the vote. Clinton upped that to 16,037-6,564 on Nov. 8, an uptick of 2,953 more Democratic votes and 357 more Republican votes. Based on that outcome, the 45th Ward qualifies as a mini-Manhattan.

There may have been a "Trump movement" in other states, but there was a definite anti-Trump groundswell in the 45th Ward. Trump won none of the ward’s 48 precincts, and he got over 40 percent of the vote in six, over 30 percent in 14, over 20 percent in 15, and under 20 percent in the remaining 13. That blowout result is a good omen for liberal Alderman John Arena, who won two elections by isolating his principal foe as a Republican.

50th Ward: Centered in West Rogers Park, the diversified ward has a large Orthodox Jewish population, who have no affection for the Obama-Kerry-Clinton policy regarding Israel, and it appears that they provided the bulk of the Trump vote. The apartmentized and condominiumized ward is crammed with young white Millennials, Asians, Greeks, Muslims and Hispanics, who make up two-thirds of the population. They didn’t vote for Trump. Obama won 11,172-5,120, and Clinton won 13,316-4,792, a result which clearly shows a dwindling Jewish vote. That is bad news for Alderman Debra Silverstein and state Senator Ira Silverstein (D-8), who dominate the ward’s political landscape. Change may be afoot.

39th Ward: Encompassing upscale Sauganash, Forest Glen, Mayfair and bits of Edgebrook, Albany Park and North Park, the ward has long been the lair of the "Laurino Dynasty," whose machine since the 1960s delivered votes the old-fashioned way — with precinct captains. Now everybody votes, and nobody tells them how to vote. Obama won the ward 13,545-6,092, and Clinton upped that to 15,953-5,679. Trump won over 40 percent of the vote in only one of the ward’s 45 precincts.

Alderman Marge Laurino, a close ally of Mayor Rahm Emanuel, is expected to retire in 2019, and the ward’s growing liberalism — and, to an even larger extent, anti-Emanuel feeling — bodes well for anti-Laurino Democratic Committeeman Robert Murphy, who is running for alderman. The ward has been socked with large property tax increases.

40th Ward: Another alderman soon to be out the door is Pat O’Connor, Emanuel’s City Council floor leader. The ward is centered on North Park, east of the Chicago River, and it is another mini-Manhattan minus the skyscrapers, with a diversifying population, upscale housing and lots of apartments. Clinton won an astonishing 83.7 percent of the vote, 19,643-2,780, topping Obama’s 16,264-3,057 win. Trump topped 30 percent in none of the ward’s 39 precincts, and he topped 20 percent in just four. O’Connor, who was first elected in 1983, plans to retire in 2019. His machine base has evaporated.

38th Ward: Alderman Nick Sposato, a firefighter on leave, is a good fit for the ward, which stretches from south Portage Park to the city boundary at Cumberland Avenue, and which has a large first responder contingent. Sposato toppled the 80-year "Cullerton Dynasty" in 2015, and he has been a severe Emanuel critic, joining Arena and Scott Waguespack (32nd). The mostly white ward has a growing Hispanic population in the south half, along Irving Park Road. Nevertheless, Trump did comparatively well in the ward’s 41 precincts, winning over 50 percent in two and over 40 percent in eight, but he still lost 12,939-7,580, a near repeat of 2012, when Obama won 12,178-6,479. Trump did improve on Romney by about 1,000 votes.

The bottom-line: Chicago voters suffered from schizophrenia, a separation between rational thought processes and irrational emotions. Hate of Trump was their guiding light, even if it meant more of the same under Clinton. Looking ahead to 2019, Emanuel better be quaking. 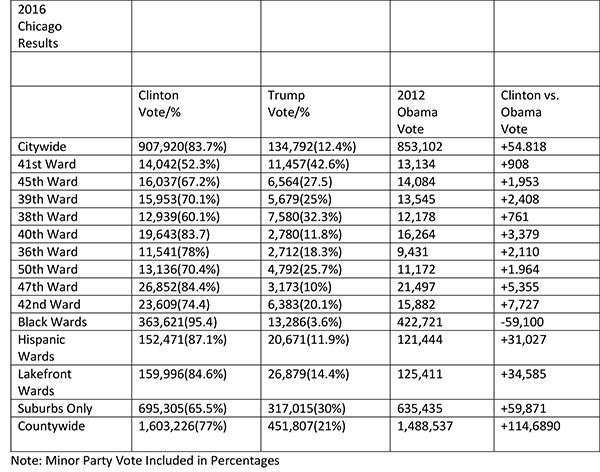