The dismal plight of the Republicans in Illinois can easily be remedied by the loss of a bit of real estate, like every square mile situated east of the Fox River Valley and north of Interstate 80.

Get rid of Cook County and the surrounding counties of DuPage, Lake, Will, Kane, McHenry and DeKalb, and Illinois would be resoundingly Republican. Of course, that’s fantasy, but the political reality is that Donald Trump beat Hillary Clinton in 91 of the state’s 102 counties and won the 95 counties categorized as "Downstate" by 1,103,012-730,437, a margin of 372,575 votes.

"Blame it on Barack Obama" is the Democrats’ refrain in 2016, attributing their Downstate debacle to the secular, politically correct, "identity"-driven cultural politics of the Obama Administration. Bush won Downstate in 2000 by a modest 76,433 votes, carrying 72 of the 95 counties. Trump won by 372,575 votes, carrying 91 of those 95 counties, a Republican gain of 296,142 votes in 16 years.

Through 14 elections from 1964 to 2016, turnout in Illinois increased from 4,702,779 to 5,165,677, an increase of 462,898, or about 9,000 new voters per year. That’s not growth, that’s stagnation. The white 1960s Democratic voters, mostly from machine-controlled Chicago, have been replaced by liberal black, Hispanic and Millennial voters, almost all from the Chicago area, and the 1960s Republican suburban base has been replaced by the once-habitually Democratic Downstaters.

Despite the Democrats’ Downstate debacle, Trump got only 100,000 more votes statewide than Bush got in 2000 and than McCain received in 2008, and 17,039 fewer votes than Romney got in 2012, but their allocation was much different. The Republican brand, which is perceived as anti-choice, anti-gay, anti-immigrant and anti-social welfare program, no longer sells in the suburban sprawl surrounding major urban centers. Growing black and Hispanic populations, which in Illinois number more than 30 percent, plus the gay vote, explain why there are 300,000 more Democratic voters in Cook County than there were 2000 and 150,000 more in the outlying counties.

Here’s a look at the trends in the outlying counties:

Lake County. A Republican bastion as recently as 1984, when Reagan won 118,401-53,947, the county has become more Democratic with every passing election. The county includes tony Lake Forest, Highland Park and Lake Bluff, along the Lakefront east of Route 41. Those voters flocked to Clinton in droves. Those in heavily Jewish Deerfield, Riverwoods and Buffalo Grove had no use for Trump. Hispanic voters in North Chicago and Zion and black voters in Waukegan went overwhelmingly for Clinton. Western areas of the county, including Lake Zurich, Mundelein, Libertyville, Wauconda and Fox Lake, used to be bedrock Republican, but they now have an exploding Hispanic population, while working class towns such as Round Lake Beach and Grayslake are now over 75 percent Hispanic.

DuPage County. Back in Pate Philip’s heyday, when he was a state senator and the county Republican chairman, DuPage had a machine which rivaled that in Chicago. Virtually every office, all the way down to school board and park board, was held by a Republican. Few Democrats bothered to run.

That’s been changing since 2002, when Philip lost his Senate majority and retired. The Hispanic population exploded in the northeast corner, in Addison, Wood Dale and Bensenville. Naperville has become a trendy shopping-and-eating enclave, filled with liberals, as are the towns to the east, Lisle, Downers Grove and Hinsdale. That gives the Democrats two anchors. Reagan won 227,141-71,430, a 155,711-vote margin, which was enough to put a dent in the Democrats’ Cook County margin. By 2000 the Republican bulge was down to 48,487 votes . . . with no dent.

Will County. Joliet, with a huge black and Hispanic population, delivers 3-1 Democratic majorities, Hispanics are now dominant in Bolingbrook and Romeoville, and increasingly upscale Frankfort, New Lenox and Mokena are younger and less Republican than they used to be. Clinton won by 16,504 votes, not much better than Obama’s 9,156, so the Republicans are not under the bus yet.

McHenry County. Republicans once fantasized McHenry as the next DuPage. Reagan won 47,282-14,420, and once-sleepy towns such as Crystal Lake, McHenry and Woodstock have had a rapid influx of working class whites over the past 20 years. Bush won by 21,414 votes in 2000, and Trump won by 11,290 votes, in a turnout of 130,944, getting just 54 percent of the vote. Forget the DuPage County scenario.

Kane County: The Fox River Valley runs along the east border, connecting largely Republican Batavia, Saint Charles and Geneva, but as shown by Clinton’s 17,302-vote win, the real power lies in Elgin and Aurora, both with significant Hispanic populations. Bush won by 16,689 votes, but Kane has flipped.
Illinois has become, and will continue to become, more Democratic. 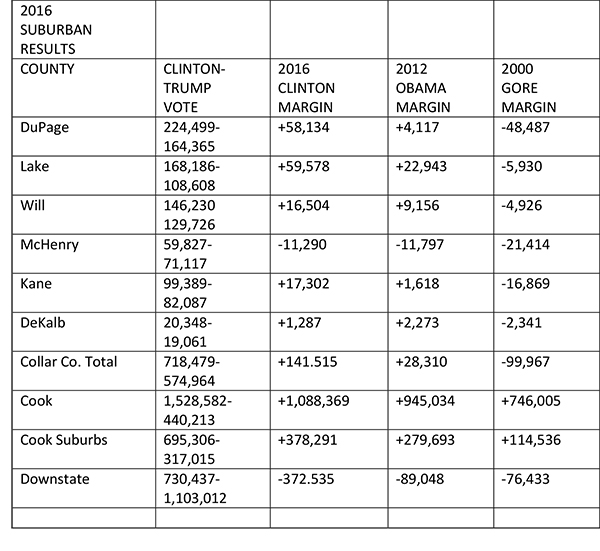